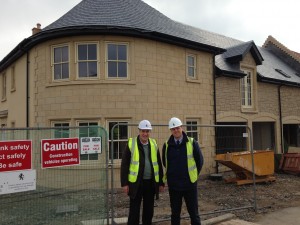 Hudson Hirsel has set up a Trust Fund which will benefit the community of Coldstream to the value of £200,000

Hudson Hirsel is pleased to announce the establishment of a Trust Fund which will ultimately benefit the community of Coldstream to the value of £200,000.  The key purpose of the Hudson Hirsel Fund is to benefit Coldstream and its local community by supporting recreational activities such as participation in sport, promotion of the arts, culture, heritage, education, environmental improvements and charitable initiatives or provide a community benefit.

Hudson Hirsel is currently building new homes at Leet Haugh, its conservation-style development in Coldstream, and in the village of Birgham between Coldstream and Kelso.   Jamie Hudson, Managing Partner of Hudson Hirsel, stated “from the outset the Hirsel Estate gave a commitment to the local community that it would share some of the benefit from its development at Leet Haugh with the residents of Coldstream and its surrounding area.  The Hirsel Estate has a long history of working with the local community having gifted many of the existing community facilities to the town.

The Fund is being administered on behalf of Hudson Hirsel by the Coldstream Community Trust which is a regulated charity.  Initially grants up to £3,000 are being considered and applications will be invited twice a year. Trust Vice-Chairman Rannoch Daly said: “The Trust is delighted to be operating the Hudson Hirsel Fund as one of our sub-committees. I have been asked to chair the HHF  Awards Panel and Gerald Tait, the Trust Secretary, will be doing the administration.  We expect to meet twice a year to consider applications. A representative of Hudson Hirsel will be on the panel together with several Coldstream people with a “community-minded” approach. We want to get under way without delay so we have set 1 June 2016 as the cut-off date for receipt of the first applications. This may mean some quick work by those who are interested to submit an application in the first round which is robust and well-prepared.  And for those who need to take a bit longer; we’ll have another round in the autumn.”